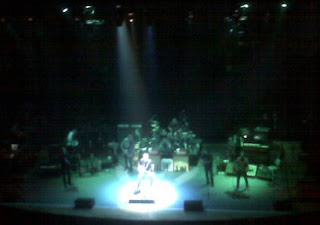 The summer is coming and I realized I have a whole bunch of concerts to go to this year and I thought it would be fun to review them. The first up is Mark Knopler at Massey Hall last night.

The concert was pretty mellow and he playing much of his solo work and it seemed like most people were just waiting for his Dire Straits hits. I liked his solo work and his style of playing and I was very happy to not hear 3 minute songs with no jams. His band had many great acoustic and electric jam sessions with a good assortment of instruments. He did bust out 2 big Dire Straits songs, Sultans of Swing and So far Away and while it was great to hear those songs, it almost seemed like he rushed through them compared to some of the newer stuff. I was a bit disappointed that he didn’t play “You can’t beat the House” from his Get Lucky album which is my favorite song from it.

Massey Hall kind of sucked, or least my seats did, I was up on the top level and the seats were so close your knees were tight against the seat in front of you. if you ever go to Massey, I recommend you pay the extra $20 or more for the lower levels. The sound was pretty good in there.

So lets rate this show..

I am happy to announce that I will be showcasing my art this year at The Artist Project. It starts on April 21 and runs to April 24. It has a new location in the Queen Elizabeth Building of the CNE (190 Princes’ Blvd, Toronto, ON M6K 3C3). I will be in booth 332. Here […]