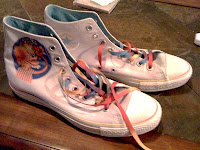 I haven’t seen anything Grateful Dead or even close for almost 5 years. Last show I saw was Rat Dog In Toronto, so I was very happy for this show. It was great to travel there with my son Brenden and hook up with my old friends Drew and Talli and see their 3 great kids. I also busted out the converse which have been sitting in my bookcase for the last year or so. They were unused until this show where they got broken in pretty good.

I know most of the sets Further play recently are vastly different than the Grateful Dead shows I used to see, yet it seemed this set was more like what I used to see and there was only 1 song I had never heard played before, but what a song.. Caution “Do Not Stop On Tracks”. It was about the sweetest thing I ever heard. Another great thing for me was that when I toured, songs like Alabama Getaway, Speedway, Smokestack, and Dire Wolf was once a tour songs (maybe twice) it was awesome to hear them all in one show..
At the beginning of the show I was loving the music but I was still a bit self conscious about letting loose with the dancing. What I would call the second set (but they didn’t take a break) starting with Help on the way and going to Wharf rat was so smokin. When they played this I was back in full spinner mode.
I fought the Law and Liberty, meh.. Heard them way too much, Touch of Grey was pretty sweet.. Overall, Awesome show for me..
They started the show a bit late so they skipped the intermission and played straight through. The Set list was 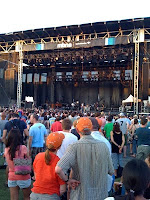 Alabama getaway,
Don’t ease me in,
Mama tried,
Dire wolf,
Hell in a bucket,
Bertha,
Trucking.. Smokestack Lightning
Casey Jones
I need a Miracle… Help on the way.. Caution Do not step on tracks.. New Speedway Boogie.. Wharf rat,
I fought the law
Liberty
Encore:
On the Road Again
Touch of Grey

Hello, I am thrilled to be participating in the Toronto Outdoor Art Fair Online Show. It will run from July 2-11! View my online profile and artwork that I have on sale this year by following this link. Engage with artists, enjoy art talks, browse curated collections, and buy art from 400+ juried artists at […]