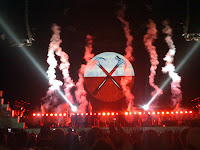 This is my review for Rogers Waters performing The Wall last night at the ACC. I have included tons of photos, I am sorry the quality is so bad, all I had was my phone to take the photos.

The show was fabulous, fantastic, incredible, etc.. 11/10.
Roger took a huge portion of seats and dedicated them to the show which was great to see as he didn’t just cram us in there. They started the show with a partially built wall which a plane (seemed full sized) crashed into during the first song. Throughout the first set of the show they slowly built up the wall until intermission when it was complete. During the second set they played around the wall until the end, when it came crashing down.
I was sitting 22nd row center floor, the tickets I got from the Roger Waters website and they were worth every penny I spent on them. His voice sounded great, the stage and sound quality were awesome. Pink Floyd is one of my favourite bands, I seen them once in Oakland CA in 1994 without Roger Waters and now I have seen Roger Waters, so I am almost satisfied. When growing up through high school, Pink Floyd The Wall was like a religion to me, yes I was a bit obsessed… This was the last person that would be on my wish list of artists to see and he didn’t disappoint, as a matter of fact, he blew all other shows I have seen away…
It is kind of hard to describe the show, hopefully these photos will give you some idea…

I am happy to announce that I will be showcasing my art this year at The Artist Project. It starts on April 21 and runs to April 24. It has a new location in the Queen Elizabeth Building of the CNE (190 Princes’ Blvd, Toronto, ON M6K 3C3). I will be in booth 332. Here […]